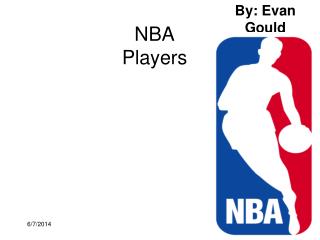 By: Evan Gould. NBA Players. Michael Jordan. Michael Jordan is probably the best person who ever touched a basketball,but some people say Wilt Chamberlain was better! Not true!! Michael Jordan won a championship game with the flu!!!!!. Chris Paul. 185 cm NBA Players - Height matters a lot in nba that is the national basketball association. some players in the nba

Free Agency Market for NBA Players in 2010 - . introduction / thesis. the sports industry is the 9 th biggest industry in

NBA - . by: kyle ancheta. inventor of basketball. in 1891, james naismith invented basketball at a ymca center in

NBA - . n othing b ut a mazing. the scene. it’s 1993, game 7 of the second round playoffs between the houston rockets

NBA Cares - . by: chandler nielsen. commitment. the nba is dedicated to demonstrating leadership in social

The NBA - . by anthony trompf. about nba. the nba stands for national basketball association it is a very big sport in