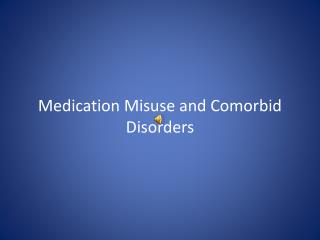 Medication Misuse and Comorbid Disorders. Objectives. Understand which disorders are frequently found among medication misusers Understand the impact of these disorders on pain treatment Understand prescription medications can be used to self medicate

SUBSTANCE ABUSE AND DEPENDENCE: An Overview - . rnsg 2213. introduction. substance abuse is not a new problem.

Invisible Epidemic? - . abuse of alcohol and prescription drugs by those over 60 is a rapidly growing problem it is

Dual diagnosis: An Integrated Model for the Treatment of People with Co-occurring Psychiatric and Substance Disorders