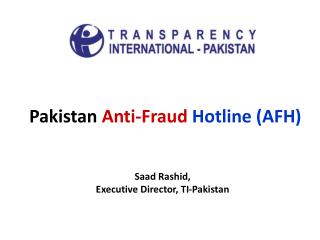 Pakistan Anti-Fraud Hotline (AFH). Saad Rashid, Executive Director, TI-Pakistan. About us. What We D o. Established as a Trust in 2001 Accredited as a National Chapter since 2005 Head Office is in Karachi Operates Independently under TI’s Governance Policy Fraud and Ethics Hotline - . november 3, 2008. why a hotline?. uisd wants to establish a formal procedure for employees

SAS 99 and the Fraud Hotline - Training for activity fund clerks, secretaries, &amp; principals 2018-2019. what is

Anti-Corruption and Anti-Fraud - How to deal with corruption and fraud beyond policies and strategies. p ractical

Anti-Fraud Program 2013 - . welcome to siu 101. this presentation was designed to introduce you to our anti-fraud

The National Anti-Fraud Network NAFN - Aims. tell you about