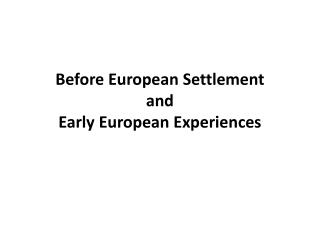 Before European Settlement and Early European Experiences. Before the Europeans Arrive. 1492: 54 million people lived in the Americas Over 2,000 separate cultures Peru = Incas Central American = Mayans Mexico = Aztecs Main crop is Maize No horses, oxen, or even a wheel

European Exploration - . france, england, and spain come to the new world. the big three . after columbus

Experiencing European Feudalism - . experiencing european feudalism. you are members of european society during the

The Americas Before and After the Europeans - . an introduction to the colonial unit. american settlement timeline.

SSUSH1 - The student will describe European settlement in North America during the 17th century - . c. explain the

European Exploration of Georgia - . europeans traveled to the americas in the late 15th century for:. 1. riches 2.