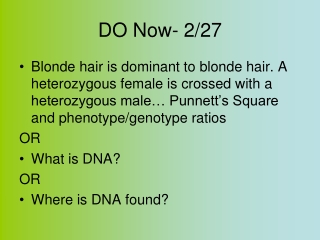 DO Now- 2/27. Blonde hair is dominant to blonde hair. A heterozygous female is crossed with a heterozygous male… Punnett’s Square and phenotype/genotype ratios OR What is DNA? OR Where is DNA found?. TAKE YOUR MITOSIS PROJECTS HOME!!!! I’m throwing them out tmw.