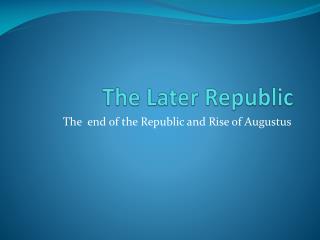 The Republic - . by plato, circa 380 b.c. topics for presentations. discuss the evolution of the first western

The later middle ages - . crisis and disintegration in the 14 th century. famine and population. toward end of 13 th

for later … - . ask about our tea time gourmet every single day at afternoon. ice cream or sorbet made in nanka 9

Later life - . was a tractor wen he grow up he walked the silk road and he grow up to be a merchant and flooded in his

The Republic Weakens - . do now. explain anything you have learned about rome. quote. historian william c. morey wrote

The Weimar Republic - . lesson starter: how do you think germans reacted to the treaty of versailles? which term do you