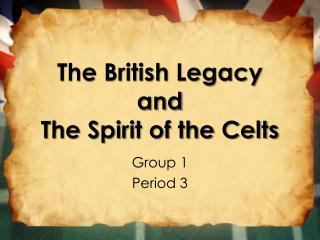 The British Legacy and The Spirit of the Celts The British Legacy and The Spirit of the Celts. Group 1 Period 3. Before we begin…. How many times has Britain has been invaded? What was the Celtic religion? What was Stonehenge? Who was Britain named after?

The British Legacy and The Spirit of the Celts

The Spirit of Independence - . lesson 1 no taxation without representation. objectives. explain the proclamation of 1763.

THE CELTS - . by serena quondamatteo. who were the celts?. the celts were fearless, ruthless warriors and they were also

The Anglo-Saxons - . 449-1066. the british legacy. the british had a major influence on america government emphasizing

The Anglo-Saxons - . 449-1066 ad. the british legacy. had been invaded and settled many times over and all contributed to

The Anglo-Saxons - . 449-1066. the british legacy. great britain has been invaded and settled many times by various

Who were the Celts? - . who were the celts?. before going any further it is important to explain what is meant by the

Celtic Druid - . luke mays. -druidism came from the land of gaul. -lived in the iron age and british isles. -most

CELTS - . courtney. jade. contents. homes. what they like like. w ho they are . where they live. what did they wear to

The Celts - . by kaelan zipoli. who were the celts

THE CELTS - . by thomas. pictures. who were the celts. the iron age celts lived in britain before and after jesus. we're

The Celts - . mrs. norberry. gaul before the

THE CELTS - . by kayleigh and sarah . who were the celts . the celts came from central europe. around 500 bc , perhaps to The Celts - . 1. who were the celts?. the celts came from central europe to ireland around 600 b.c. they were fearless