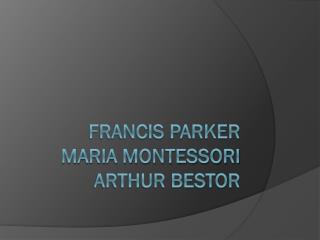 Francis Parker Maria Montessori Arthur Bestor. Francis W. Parker. Oct. 9 th 1937 – March 2 nd , 1902 Mother was a teacher before she married Began teaching himself at 16 Served as principle and superintendent at various institutions in Massachusetts and Illinois

This is Parker Hannifin Corporation - . parker is the global leader in motion and control technologies, partnering with

Montessori gifted child - Before you select which montessori school to apply, consider the following factors to help

THE MONTESSORI METHOD - . who is maria montessori?. she was born on 31 august 1870 at chiaraville , italy. she was the