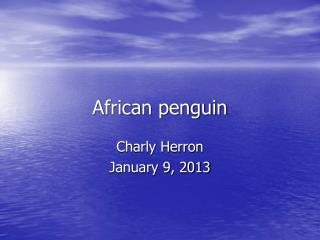 African penguin. Charly Herron January 9, 2013. Description. The penguin has speckles and black and white feathers. Their height is 27 inches. They weigh 7 to 11 pounds. Habitat. The continent is Africa. The penguin lives near South Africa. Diet. It eats fish, squid, and krill. African penguin - . by anna chunco. this story is dedicated to:. brianna gross because she loves penguins very much.

African Penguin - . by jessie. habitat. the african penguin lives on the coast of africa and on nearby islands.

African Penguin - What are we doing about this?. african penguin. by: nick pollard. aliases. spheniscus demersus j ackass

Penguin - . by ashlyn. this is how i would describe a penguin .the emperor penguin lives in antarctica. the boy sits on

Penguin - . the penguin's a bird that cannot fly but can swim like a torpedo!  and on the ice  it looks so

Penguin - . by a lyssa. description. my animal is a penguin. my animal can live in a nests. interesting fact. the penguin

Penguin - . general facts. penguins are birds with black and white feathers and a funny waddle.  but unlike most birds,

Penguin Chick - . building chick. have you ever seen a penguin and its chick?. where do penguins live?. they live in cold

Emperor Penguin - Mikayla duta 5h 12/10/08. i picked the emperor penguin because penguins are my favorite animals and