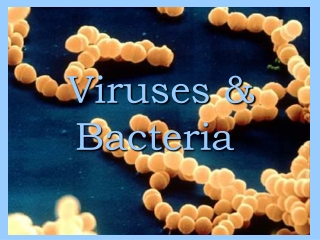 Viruses & Bacteria. Section 18.1 Summary – pages 475-483. What is a virus ?. Viruses are nonliving infectious agents composed of nucleic acids enclosed in a protein coat and are smaller than the smallest bacterium.

Chapter 18 and 20 - . viruses, bacteria, dna technology, and genomics. the genetics of viruses and bacteria. viruses

Ch. 18: The Genetics of Viruses and Bacteria - . intro. bacteria and viruses are the simplest biological systems. most

Bacteria and Viruses - . bacteria. bacteria - small one celled organisms bacteria like a warm, dark, and moist

Viruses and Bacteria - . chapter 18. viruses – alive?. what makes something alive? organization based on cells and dna

Viruses &amp; Bacteria - . chapter 17 biology 11 presentation put together by mandie lynn walls. what are viruses. a

Bacteria and Viruses - . what is a prokaryote?. microscopic usually ____________ celled usually have a cell wall, but no

Viruses &amp; Bacteria - . viruses. traits neither living or nonliving not made of cells don’t grow or respond to

Introduction to Bacteria and Viruses - Bacteria and viruses. microbes are things that are so small we can not see them