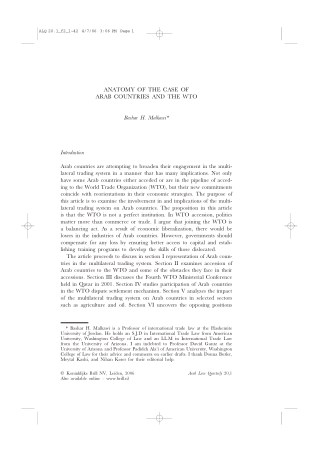 Arab countries are attempting to broaden their engagement in the multilateral trading system in a manner that has many implications.Not only have some Arab countries either acceded or are in the pipeline of acceding to the World Trade Organization (WTO), but their new commitments coincide with reorientations in their economic strategies. Momentum Systems: Make your Business More Efficient with a Safety Management Software! - Based on an organizations needs

CHAPTER FIFTEEN Lending Policies And Procedures - . the purpose of this chapter is to learn why sound lending policies

Regional Workshop on Agriculture-Related Issues in The Preparation for Accession to The WTO - . countries in the process

Workshop on Strengthening the Culture of Nuclear Safety and Security - Marinha do brasil – ctmsp. insights on the role

Stereotypes and Realities of the Middle East , Arabs and Muslims - . barbara petzen. stereotypes of the middle east. what

In All Fairness: Cross-cultural Perspectives on Water Quality and Equity - . meredith gartin doctoral student, school of