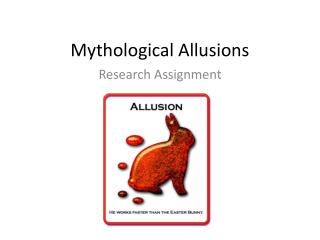 Mythological Allusions. Research Assignment. For Each Allusion. Identify/summarize the story for each of the underlined mythological figures

Allusions 3 - . an allusion, not to be confused with illusion , is a reference to another literary work, work of art,

The Grapes of Wrath by John Steinbeck - . historical context and biblical allusions. &quot; the grapes of wrath may

Allusions - . not “illusions”!!!. what is an illusion?. illusion. a false appearance or deceptive impression of

Leaving Prince Charming Behind - . karlo mila. do now:. write down all the fairy tales you know that feature love stories

The Iliad - . agenda: information about hostory through pictures home text analysis mythological background. the world of

Thoughtful Theseus - . athenian hero known for his brains and intellect athenians would more likely be impressed with an

Allusions - Dominate. a brief, usually indirect reference to a person, place, event, or piece of literature—real or