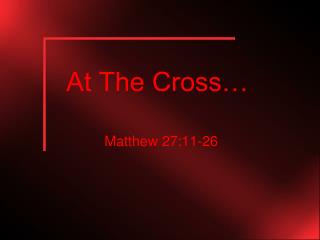 1. When a car ahead has stopped to allow a pedestrian to cross the street at a marked crosswalk, you must: - A.  stop

Pre Calc Chapters 5 and 6 - . trigonometric functions of real numbers. the unit circle—5.1. q: what do you get if you

The Way of the Cross - . parish of sto cristo del calvario. first station jesus is condemned to death we adore thee, o

The Cross and the Prophecies of Daniel and Revelation - . fred bischoff www.scripturefirst.net. introduction. before we