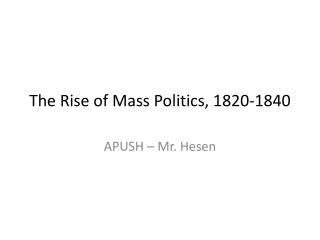 The Rise of Mass Politics, 1820-1840. APUSH – Mr. Hesen. The “New Democracy”. 1820s-1840s Politicians made an effort to appeal to common man Most politicians were wealthy Change in emphasis: Jeffersonian – Govt. for the people Jacksonian – Govt. should be done directly by the people.