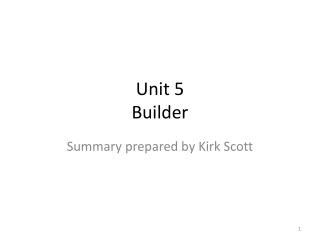 UNIT 5 - . circles. key term (only write what’s in red ). circle: the set of a all points that are a given distance

UNIT 5 - . the origin of life and evolution. how a species is formed. biology and geology 4. secondary education.

Unit 5 - . topic 3 – erosion . erosion. erosion  is the movement of rock and mineral grains from one place to another

Unit 5 - . assessing the performance of fm for the future. overview. using the context of pa as the vehicle to