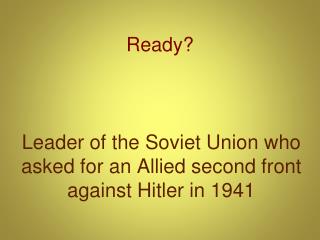 Ready?. Leader of the Soviet Union who asked for an Allied second front against Hitler in 1941. Joseph Stalin. Fascist dictator of Italy. Benito Mussolini. Fascist dictator of Germany. Adolf Hitler. Term for “ Giving in to Hitler to keep the peace in Europe. ”. appeasement. Get ready for the - . ap history test. let's practice!. 1. the farmers' alliances of the 1880s appealed primarily to (a)

ARE YOU READY ? - A.p. psychology unit 1 test review. are you ready ?. we believe that all people are striving to

Next Generation Math Assessments Getting Ready for the Next Gen (and This Gen) February 2010 - . mike gallagher math test

Are you ready for a Site Visit? - . presented by: beth meadows, rn wendy holmes, rn. background on the north carolina

Unit Four - . unit 4 attending fairs and exhibitions. 1. getting things ready. 2. 3. things to do. things to write.

The Memory Game - . ready to get your brain jumping?. the memory game. look at the picture for 25 seconds. remember what