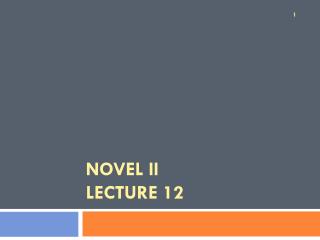 James Joyce (1882-1941) - . born in dublin to an impoverished family educated by the jesuits left ireland for medical

Synopsis - . the path of the exam. what is a synopsis?. a short exercise - 2 pages per person it is not an essay! it is

Expressed Emotion Chapter 12, Lecture 3 - . “like most psychological events, emotion is best understood not only as a

Hunger Motivation Chapter 11, Lecture 2 - . “grocery shop with an empty stomach and you are more likely to think that

The Lighthouse Keeper’s Lunch - . by :ella year 2s. once upon a time there was a lighthouse keeper called mr grinling

Lord of The Flies - . aliyah marable. “the beast had teeth and big black eyes.”. “the pigs lay, bloated bags of