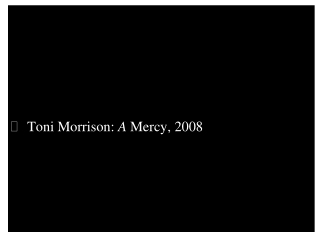 Toni Morrison: A Mercy, 2008. The novel is set towards the end of the XVII century, in rural Virginia, at is when the Maryland was still a British colony and Virginia a Portuguese colon y, and people were coming from all over the world seeking fortune.