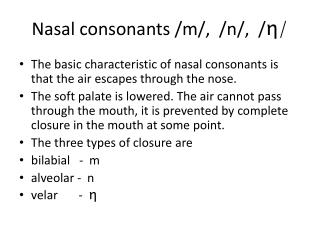 Nasal consonants /m/, /n/, / η /. The basic characteristic of nasal consonants is that the air escapes through the nose. The soft palate is lowered. The air cannot pass through the mouth, it is prevented by complete closure in the mouth at some point. The three types of closure are

Vowels - . vowels are the most sonorant (or intense) and the most audible sounds in speech. they usually function as the

PHYSICAL PROPERTIES OF SPEECH SOUNDS - . we have concentrated for the most part on the articulatory description of speech