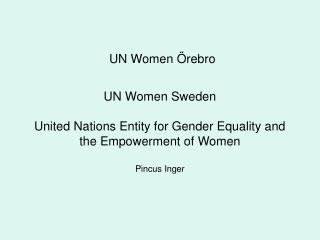 UN Women Örebro UN Women Sweden United Nations Entity for Gender Equality and the Empowerment of Women Pincus Inger. UN Women Örebro’s responsibilities. To bring public attention to the Convention on the Elimination of All Forms of Discrimination against women (CEDAW -1979).

Secretary - . role, responsibilities and tasks. what will i be learning in this course? . upon completion of this course

Treasurer - Roles, responsibilities and tasks what will i be learning in this course? upon completion of the course you