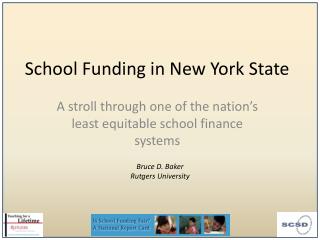 School Funding in New York State. A stroll through one of the nation’s least equitable school finance systems. Bruce D. Baker Rutgers University. National Perspective. Which States are Most/Least Fair in their School Funding? . Funding Fairness across the U.S. In New York State - A coordinated best practice approach to:. in new york state. 1 st to coordinate a statewide

LOBBYING IN NEW YORK STATE - . an overview of the lobbying act and jcope’s new regulations. lobbying is any attempt