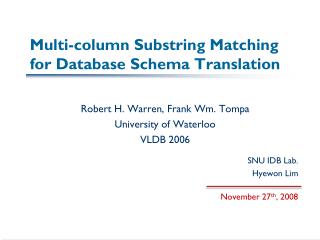 Substring Statistics - . kyoji umemura kenneth church . goal: words  substrings (anything you can do with words, we

Schema Matching Algorithms - . phil bernstein cse 590sw february 2003. acknowledgments. many of these slides are from

Lecture 3 ORACLE Database Schema - . objectives. after completing this lesson, you should be able to : start and stop