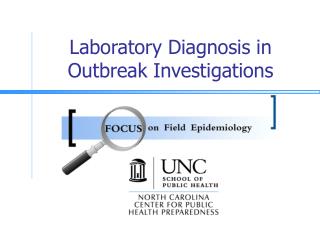 Outbreak Management - . learning objectives. describe the occurrence of disease in a population. discuss how an epidemic

I is for Investigation - . outbreak investigation methods from mystery to mastery. session i. recognizing an outbreak.

Embarking on an Outbreak Investigation - . goals . the goals of this presentation are to discuss: the importance of

Overview of Outbreak Investigations - . goals . the goals of this presentation are to: provide a general overview of the

CHAPTER 8 Cooling System Operation and Diagnosis - . objectives. after studying chapter 8, the reader will be able to: