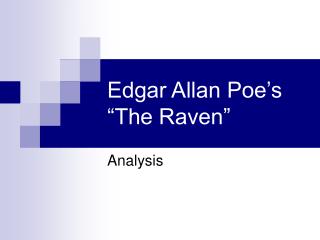 Edgar Allan Poe’s “The Raven”. Analysis. " The Raven " is the most famous of Poe's poems, notable for its melodic and dramatic qualities. Rhyme and Meter. The meter of the poem is mostly trochaic octameter, with eight stressed-unstressed two-syllable feet per lines. THE RAVEN by Edgar Allan Poe

Edgar Allan Poe - . “all that we see or seem is but a dream within a dream .” . brief background. born in boston on

Edgar Allan Poe - . north american literature i. “they who dream by day are cognizant of many things which escape those

Edgar Allan Poe: Planning for Writing The Raven - . texts. the raven and the peak of tragedy (excerpt) edgar allan poe

Edgar Allan Poe - &quot;the death of a beautiful woman is unquestionably the most poetical topic in the

The Raven Edgar Allan Poe - . l.o. to be able to explain the effect of a ‘the raven’ on the reader. starter: look