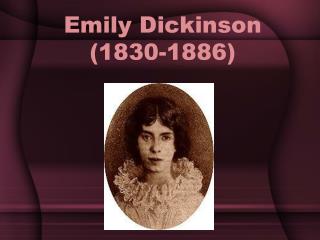 Emily Dickinson (1830-1886). Emily Dickinson: Biography. Born the second of three children in Amherst, Massachusetts Father was a lawyer and one of the wealthiest and most respected citizens in the town, as well as a conservative leader of the church

Faculty Disclosure - . emily oken , md, mph dr. oken has listed no financial interest/arrangement that would be

Pituitary Dwarfism By Emily Owen - . definition. abnormally short height in childhood due to the lack of growth hormone

“I Heard a Fly Buzz—When I Died” Emily Dickinson

American Poetry in the mid-1800’s - . emily dickinson and walt whitman. what do you know about poetry?. rhyme meter