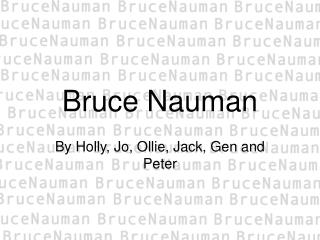 Bruce Nauman. By Holly, Jo, Ollie, Jack, Gen and Peter. About Bruce Nauman. Bruce Nauman was born in 1941 in Fort Wayne, Indiana. He studied art, mathematics, and physics at the University of Wisconsin.

Obama awards Medals of Freedom - In one of his final acts in office, president barack obama awards the 2016 presidential

“… what they will be” - . r bruce miller founding university librarian university of california merced. audacious

Bluetooth Defense Kit - . bruce potter …with help from will davis august, 2006. don’t believe anything i

Bruce Naigles’ Sculptures - . from a philosophical standpoint, all that we perceive in the world of form is an outer