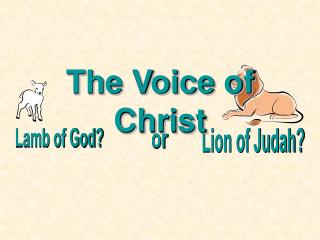 The Sacraments of Christ - . what is a sacrament?. a sacrament is an outward sign or symbol instituted by christ to

The Bride of Christ - . old testament. isa 54:5 for your maker is your husband— the lord almighty is his name— the

the Death of Christ - Remember. the death of christ. romans 14:8-9. romans

How To Hear God’s Voice - . god wants to communicate !!! the voice of the holy spirit the word “prophetic” –

Investigating The Voice - . the voice follows the rules of physics…. the pitch of a vocal sound is affected by the air

Kneel at the cross, Christ will meet you there, He intercedes for you; Lift up your voice, - Leave with him your care

Letters from Christ - . 2 corinthians 3. background. paul established the corinthian church in 52 ad. he stayed with them