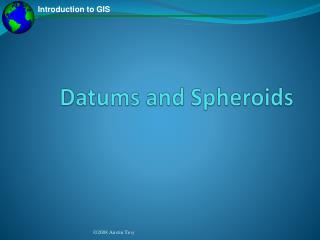 Datums and Spheroids. The Earth’s Shape and Size. It is only comparatively recently that we’ve been able to say what both are Estimates of shape by the ancients have ranged from a flat disk, to a cube to a cylinder to an oyster. Pythagoras was the first to postulate it was a sphere

Projections and Datums within ArcGIS - . melita kennedy. 2012 datum series sponsored by gpsmms subcommittee. this is the

Map Projection Basics - Map projections and datums of the atlantic provinces making it fit - or - having a fit by m.