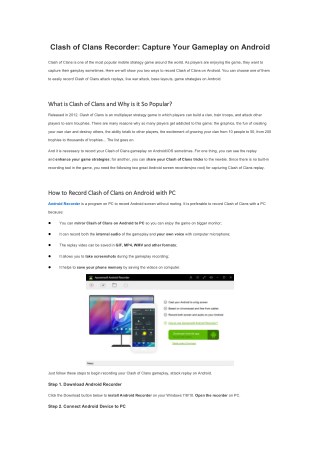 Clash of Clans Recorder Capture Your Gameplay on Android Here are two ways to record Clash of Clans on Android with or without PC. You can easily record attack replays, live war attack, base layouts, game strategies.

Clash of Clans Recorder Capture Your Gameplay on Android

Android Nougat: Key features revealed - Google shocked everybody with the declaration of the android 7.0 nougat name on

CLASH OF CLANS - . goal the games consists in improving a village. its final goal is to reach the larger number of

Android 19: Publishing - . kirk scott. introduction. there are several sections of the android developer’s web site one