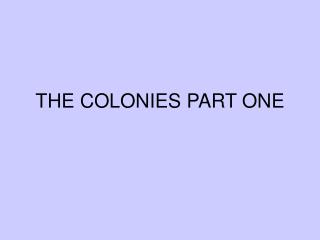 THE COLONIES PART ONE THE COLONIES PART ONE

PART ONE - . the profession of

Part One: The Questions

The Colonies - . remember, some people in england moved to the new american colony. this was a new place. the english

Part One - . what &amp; when. at the end of the medieval period art moved from this to this. giotto’s “meeting at

The Colonies - . us history ms. naghizadeh. the 13 colonies. it all began with the settlement of virginia in 1607. a

Part One - . principles of sustainability. objectives. after reading the assigned chapter and reviewing the materials

Part One - . warm-up. enter. warm-up. contents. picture description quotations on thinking what is your story? . picture

Part One - . waterloo community schools leadership for learning. “leaving a legacy of student achievement”. what do i