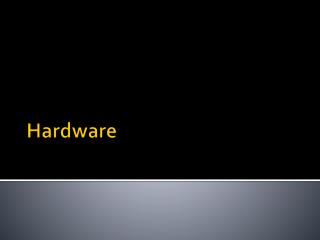 Hardware. Von Neuman Architecture. Design model for a computer Named after John von Neuman Instructions that tell the computer what to do are stored in memory Stored program. Memory. CPU. Input. Output. Memory. The working memory of the computer Where program and data are stored Hardware - Equipment is used in almost all the fields and line of work like building materials, construction equipment

HARDWARE - . rashedul hasan. hardware. hardware is the tangible part/s of the computer. along with the processor, ram,