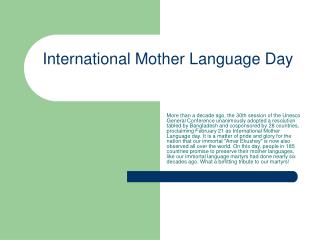 Welcome to our Mother Tongue Coffee Afternoon - . purpose of today. explain why we value mother tongue and s hare some of

Independence: 1971 from Pakistan after a 9-month long bloody war - . facts at a

Seminar for International Teaching Assistants Session 2 “Learning the Language” - . introduction. (to begin) what is