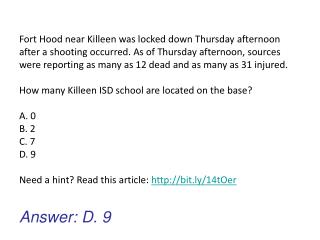 9 th Grade TAKS - Released Tests - by Objective - . objective 1: the student will describe functional relationships in a

1. Diagnostic Questions Answer the following questions on a sheet of paper. - 1. diagnostic questions answer the

Unit 5 Study Guide Answers - . 1. define slope and explain how to find slope from a table of values (chart). slope is the

Stop, Drop, Recycle - . how to play: there will be a board on the next slide. choose a question and try to answer it. you