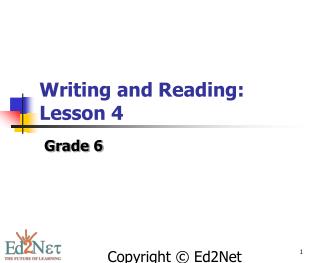 Writing and Reading: Lesson 4. Grade 6. Warm up: Homonyms. Remember: Homonyms are words that sound alike have different meanings and different spellings. Here’s one commonly misspelled set of homonyms: Its – Belongs to an it The dog ate its M&M’s and wanted mine. It’s – It is

Reading and Writing HSPE: - . what students need to know. do you want to graduate? then be here to take and pass the hspe

Reading and Writing Connections - . karen y. silvestri. which came first?. how do you think reading and writing are

Reading and Writing Skills Lesson 2 - . fact and opinion. what is a fact? what is an opinion?. the world cup. facts. Reading/Writing Workshop Mini-Lesson - . architecture of a mini-lesson. focus the purpose of lesson. teacher is on-stage.

Reading and Writing Skills Lesson 3 - . last lesson. we recapped fact and opinion we went over aforest we started a piece

READING AND WRITING STORIES - . chapter 9. essential questions. how do students develop concept of story? what kinds of

Introduction Reading and Writing - . read thoughtfully pg. 1-12 of 40 model essays a portable anthology including the