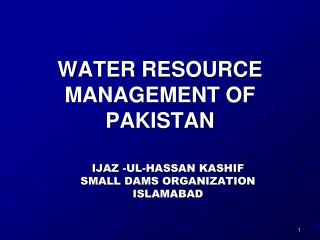 THE NETHERLANDS AND WATER IN PAKISTAN - When? why? what? presentation for “water in pakistan” workshop, 9-10-2007,

Too much water - Too little water. too much water. water environment. water quality. texas legislative background.

Fish Resource Management - . about 80% of fish harvested come from oceans. why is this obvious?. most of the world’s

What need to be balanced? - Classification of water resources and determination of the comprehensive reserve and resource

Resource Management - . reading: “a resource management architecture for metacomputing systems”. what is resource