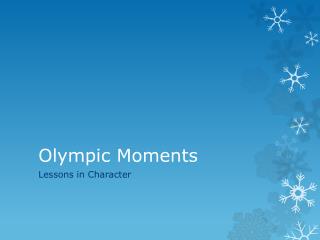 Olympic Problems - Olympic ideals the aim of the olympics is to promote: personal excellence sport as education cultural

Olympic - Games if people participated in the olympic games what couldn’t they do? have a child go to war learn to

Olympic Bobsled - . by chris r. . how much the bobsled weighs. a four person bobsled with the drivers have to weigh 1,500

Olympic Camp - . camp director: gary espinosa. what it’s all about. at the olympic camp were all about athletics if you

Olympic Lifts: - . how to perform a squat correctly by: lisa l. lemahieu. picture from: www.nerdfitness.com. what is a

Moments - . a ‘moment’ is the turning effect of a force – it can be calculated by multiplying the force (n) by the

Moments - . force. moment. the moment of a force is a measure of the tendency of the force to rotate the body upon which

Olympic Eventing - . by: rachel speaker. introduction!. eventing has been an olympic sport since ancient times. horses

Moments - . it takes less force using the spanner but it is still the same moment to undo the bolt. the turning effect of

Moments - . by amy 8y1. force. forces can make objects turn if there is a pivot. think of a see-saw. a pivot is the thing

Olympic character - . the pupil of the 6 th form a school no. 5 prokhorov bogdan teacher: ganzikova valentina

Moments - . basics . the turning effect of a force is called a moment. a moment depends on the size of the force and the