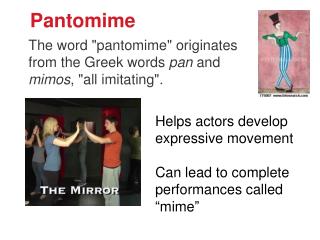 Pantomime - . why study pantomime? . it develops confidence and stage skills focus is on visibility, gesture, expression,

Pantomime - . by: abigael marcos. what is pantomime ?. pantomime is the art of using movement and facial expressions

Pantomime - . acting without words. characterization. placing a character in a situation showing thoughts through

Pantomime - . the word &quot;pantomime&quot; originates from the greek words pan and mimos , &quot;all

Pantomime - . the use of mime techniques, acting without words, to tell a story. pantomime is a specialized area of

CHAPTER 3: PANTOMIME - Objectives. 1. to develop an awareness of body language2. to use movement and body language as a

What is Pantomime? - . a form of theatre traditionally performed at christmas. it is outrageous and over- the–top

Examples of Pantomime - . the mother goose. &quot;old mother goose  when she wanted to wander  would fly through

Chapter 3: Pantomime - . pantomime is using gestures, body movement, and facial expressions to get your ideas across. use

The Fountain Square Pantomime - . for the cincinnati art museum by:alyssa f. and natalie s. . about the masterpiece. this