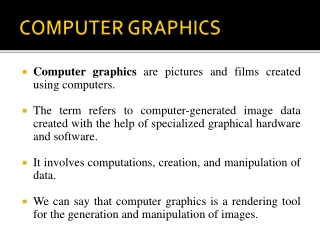 COMPUTER GRAPHICS. Computer graphics  are pictures and films created using computers. The term refers to computer-generated image data created with the help of specialized graphical hardware and software. It involves computations, creation, and manipulation of data.