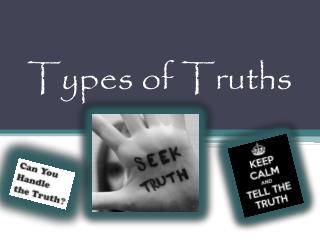 Types of Truths. Religious Truth . The bible is primarily religious truth . Religion is concerned with the relationship between human and God.

Some Lies and Truths about income taxes - One type of federal tax that americans unwittingly pay is income tax. lie 1: 2 Truths and a Lie - . on your index card write your name at the top write 2 true statements about yourself write 1 false

Two Truths &amp; A Tall Tale - . tyana v elazquez. i like to cheerlead. i’m a great cook. i love to sing and dance

What is Truth? - . major theories of truth from geisler and feinberg’s introduction to philosophy: a christian

Different Truths - . identifying truth through tok connections. what is truth?. to understand how we know, we have to

Is there a difference between reality and truth ? - . english 10 – unit 1. big question vocabulary. get out your unit 1

Truth and Dualism - . test yourself. plato. what do we know so far?. plato’s view of truth…. if something is true, it

The Truth Project - . discussions by: jim degarmo. veritology: what is

THE MEANING OF TRUTH - . susan haack &lt;shaack@law.miami.edu&gt;. “[‘true’] is a word we all understand,

“We hold these Truths to be self-evident - . that all men are created equal,. that they are endowed by their creator