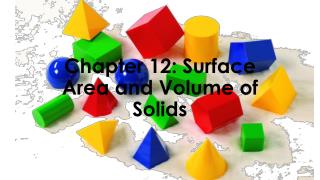 Chapter 12: Surface Area and Volume of Solids. Polyhedron. A solid that is bounded by polygons, called faces, that enclose a single region of space. Plural is polyhedral or polyhedrons. Face . One of the flat surfaces that make a polyhedron. Edge.

Surface Area and Volume of Similar Figures - . definition. a polyhedron is a solid that is bounded by polygons. tell

VOLUME OF SOLIDS - . by: samuel m. gier. think of this…. imagine transferring a 12-ounce soft drink from the bottle to

Algebra 1 Surface area of solid Figures - . warm up. 1) calculate the volume of the triangular prism with altitude = 7.6

Surface Area and Volume - . chapter 12. 12.1 exploring solids. polyhedron : a solid that is bounded by polygons, called

Volume and Surface Area of 3-D Shapes - . volume. volume is the measure of space inside a 3-d object. imagine filling the

Chapter 12 Notes - . 12.1 – exploring solids. a polyhedron is a solid bounded by polygons. sides are faces , edges are

Volume and Total Surface Area of RIGHT Prisms and CYLINDERS - . volume. the amount of space occupied by an object. how

Volume and surface area of solids - . the amount of space a figure occupies. volume. units for volume are cubic units: m