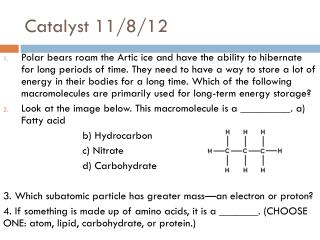 Catalyst 11 /8/ 12. Polar bears roam the Artic ice and have the ability to hibernate for long periods of time. They need to have a way to store a lot of energy in their bodies for a long time. Which of the following macromolecules are primarily used for long-term energy storage? Catalyst - Take out your hw!. catalyst. objectives i can define chemical equilibrium and identify systems that are in

Catalyst - . put safety quiz, safety contract, and donorschoose form (if applicable) in front of you. i will check them

Green Chemistry- What is it all about? - . by liam koger. green

Chapter 12 Oxidation and Reduction - . chapter 4. oxidation. oxidation results in an increase in the number of c—z

Figure 6.15 The catalytic cycle of an enzyme - . 1uok. http://www.ncbi.nlm.nih.gov/structure/. the cellular environment

Catalyst - . what question was the scientist who made this graph originally asking?. write in complete sentences! don’t