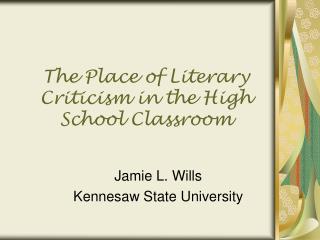 The Place of Literary Criticism in the High School Classroom

The Place of Literary Criticism in the High School Classroom. Jamie L. Wills Kennesaw State University. Do you use literary criticism in your classroom? If so, how do you use it?.

The Place of Literary Criticism in the High School Classroom

School’s out - It’s that time of year when accomplishments are celebrated and summer vacations start. milestones are

National College “ Nicolae Balcescu ” - . short history. our high school is one of national prestige as one of the

My Small Class - . and the ped-ilogical journey it sent me on. the nature of the small class. more one on one time for

PHOTOGRAPHY IN THE CLASSROOM - . joel turner ted 5351. photography in the classroom

Welcome to Klein Oak! CLASS OF 2017 - . focus on the future!. » prepare for: high school college the world of work

The “Canon” In Context - . looking at literature in its historical context. based on my experiences and those of my

Literary Lenses - . approaches to literature beyond basic understanding of plot and theme. structuralism. derived from