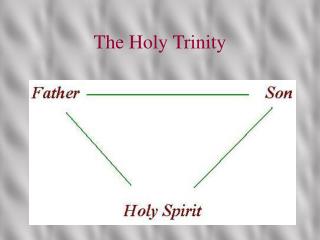 Indwelling of the Holy Spirit as a Present and Permanent possession 1 Cor. 6:19-20; Rom. 11 - Heaven and the state of

The Holy Trinity 1God in 3 Persons - . section 1 erle ladson jr religion 11. the basis of our faith. the mystery of the

In Summary The Doctrine of the Holy Trinity - . the teaching of the ‘holy trinity’ is the foundational teaching of

Holy Trinity, Newark - . tuesday 22 nd may 2012 parish renewal. introduction to the evening…. an opportunity to help

Jesus Helps us to Understand the Trinity – Part 1 - . chapter 5 theology i mr. perrotti.

Life in the Holy Spirit - . session 6. the early christians truly experienced the holy spirit at work in their lives. we

The Holy Spirit &amp; the Church - . who is the holy spirit?. third person of the trinity generated by the love of

Holy Trinity - 9 - . the second person god from god, begotten not made…. experience. you are made up of genes from your

Holy Trinity - 1 - . the first person. experience. you live in an egyptian village. you are a coptic christian and you

The Holy Spirit - . “if you love me, you will keep my commandments, a nd i will ask the father, and he will give you

The Holy Spirit - . “anointed with power” the role of the holy spirit in the ministry of jesus. testimony of th e

God Is the Blessed Trinity, Father, Son and Holy Spirit General audience of October 9, 1985 - . the church professes her