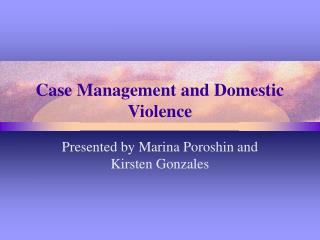 FREE MATERNITY AND CHILD CARE LAW (LMGAI) - . principle: recognition of the right to health and of the sexual and

A panel discussion on The Intersection of Domestic Violence and Brain Injury - . moderated by junauld presley, director

Dubai Foundation for Women and Children as a model for efforts in child protection - . building strong bonds for life.