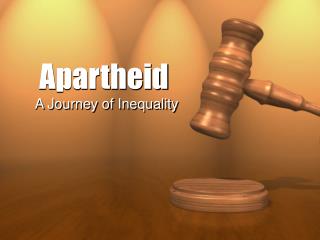 Apartheid. A Journey of Inequality. Photo Analysis Directions. In your groups, you have two photos to analyze. The photos are in your packets. Using an overhead projector marker, divide your picture into four quadrants to help you focus on all the details more effectively.

Apartheid - . under the leadership of shaka, the zulu tribe pushed into southern africa. (late 1700 ’ s) the defeated

apartheid - . by: jaquazna martin. introduction. today i am going to tell you how apartheid started and ended, who helped

Apartheid - . a journey of inequality. the history of

Apartheid: - A system for legalizing racism . apartheid:. objectives. what was the purpose of apartheid? how did

Apartheid - . the term apartheid comes from the afrikaans word for &quot;apartness&quot;. it was coined in the

Apartheid! - . what is apartheid?. after world war 2 apartheid happened from 1948 to 1994. apartheid means separation

Apartheid - . separateness and inequality. as in rhodesia/zimbabwe, but for much longer, decolonization in south africa

APARTHEID - . by julia pasqualini. a foreword. life was born in africa more precisely in ethiopia. but. the whole of

Apartheid - . a journey of inequality. photo analysis directions. in your groups, you have two photos to analyze. the

Apartheid - . angelo signore peter geraghty. the root of the conflict. apartheid: the state of being

Apartheid - . from the afrikaans word for &quot;apartness,&quot; apartheid is a term that came from the 1930s