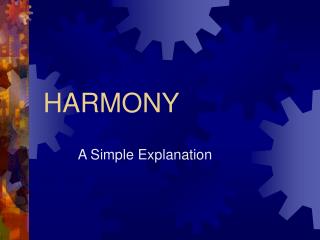 HARMONY. A Simple Explanation. HARMONY Basics. The simple definition of Harmony is 3 or more notes played simultaneously. These are called chords and their root note names them, with added information indicating their qualities.

World History Semester Review Review Game - . the main purpose of the pyramids of egypt was?. tombs for the pharoahs. a1.

Daoism Jeopardy - . the solution for humans. rituals and symbols. history of daoism. humans. the absolute. solution for

College and Scholarship Night for Parents/Students Harmony Grove Benton - . disclaimer. i am not responsible for

A Critical Perspective on Confucianism: From Yin-Yang Harmony with Nature to Oppression Toward Women - . sung hyun yun,

Harmony - . design seminar. what does the term harmony or harmonious mean?. what is harmony?. harmony is the visually