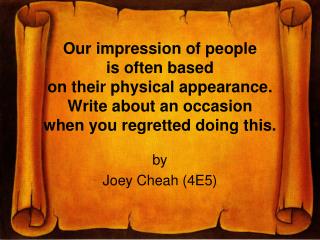 Our impression of people is often based on their physical appearance. Write about an occasion when you regretted doing this. by Joey Cheah (4E5). By Joey Cordle - . the marine occupation of lebanon. joey cordle. purpose of the marine

By Joey Lafko - 1840’s to 1850’s irish and german immigrations to american cities. by joey lafko. who was

I am by Joey - . i am smart and creative i wonder how tall the world’s tallest man is i hear the trees creaking i see

JOEY - . thank you for watching by joey

Dr Benjamin Cheah - Crucifixion. dr benjamin cheah. john 19:36 these things happened so that the scripture would be

Vlad Dracula By Joey Russell - . the inspiration behind the world’s most famous vampire. pictures. key facts. he seized

Superhero Joey - . read the story and then answer the questions. superhero joey by katherine

Joey B. - My fifth grade year. joey b. population is how many people live in a certain place. the people on the earth

Cellulite Gone PDF, eBook by Joey Atlas - Discover the truth and the facts about cellulite goneu2122 pdf, ebook by joey

BY: Ryan, Tabitha, Joel, Joey &amp; Michael - . throughout this presentation we will be discussing : shareholders -