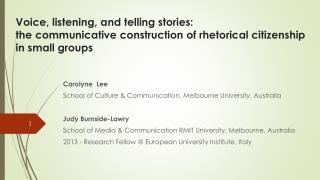 School Culture - . i don't know the key to success, but the key to failure is trying to please everybody. --bill cosby.

Ximena Camacho, The Melbourne School of Population and Global Health, University of Melbourne - The potential of linked

SCHOOL CULTURE - . the missing link in school improvement. reflect on the culture of your school. good things not so good

Building a culture of communication - . my world the king report the current reputation of corporations living in our

The university of South Australia Division of Education, Arts and Social Sciences School of Communication, - Studies and

Aboriginal Culture of Australia - . what do you think this picture is about?. australia. a continent nearly the size of

Culture of Australia - . traditional and as a result of colonization. traditional cultures. the aborigines (indigenous

CULTURE and COMMUNICATION - . “the reasonable person adapts himself to the world, while the unreasonable one persists