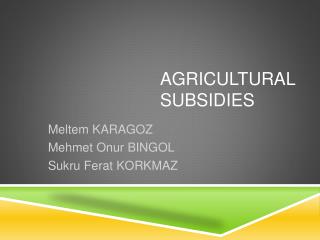 Subsidies - . no clear rules and no prohibition in gatt 1947 (notification and negotiation about limiting subsidies).

Developing countries in the Doha Round - . lecture 26 economics of food markets alan matthews. effects of further

Taxes and Subsidies - . overview. this presentation will demonstrate how to show changes in surplus when taxes and

Montenegro May 20-22,2008 - Agricultural pre accession and accession programs of the european union. montenegro may

Have subsidies played a role in IUU fishing for Patagonian toothfish in the Southern Oceans? - . unep workshop on