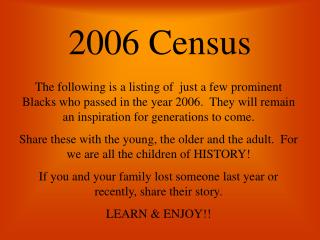 2006 Census. The following is a listing of just a few prominent Blacks who passed in the year 2006. They will remain an inspiration for generations to come. Share these with the young, the older and the adult. For we are all the children of HISTORY! Census 2006 - The changing face of Ireland - . presentation by helen cahill, cso at association of geography teachers of

2006 POPULATION, HOUSING AND ESTABLISHMENTS CENSUS IN EGYPT - . contents. introduction about the methodology 2006